All you need to know about Stomach Ulcers 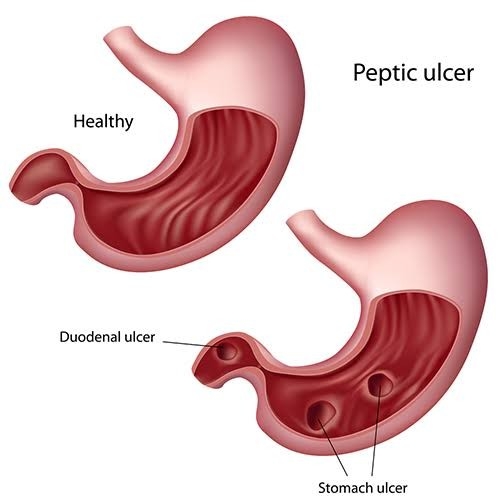 
A stomach ulcer is basically a break in the mucus lining of the stomach known as a Gastric Ulcer or a break in first part of the small intestine known as a Duodenal Ulcer. The break in the mucus membrane exposes the stomach surface to the strong acids which lead to formation of ulcers. The disease affects men more than women. Causes • The most common cause is H.pylori infection which causes around 95% of duodenal ulcers & 85% of gastric/stomach ulcers. • Another common cause is certain medications like Non-Steroidal Anti Inflammatory Drugs (NSAIDs) which include aspirin & paracetamol. These drugs affect the stomach lining when its empty & this is why it’s advisable to take these medications after meals. • Other causes include lifestyle factors like cigarette smoking & alcohol use which disrupt the stomach mucus membrane. • Dietary factors might also slightly increase your chances of developing ulcers & include intake of spicy foods and caffeine. • Severe physiologic stress which includes burns & surgery as well as serious illnesses like sepsis and hypotension may also lead to ulcer development. • Genetics also plays a significant role & more than 20% of patients with duodenal ulcers have a family history. Symptoms • Ulcers usually present with stomach pain right below the chest & is termed as heartburn. In duodenal ulcers, the pain relieves after meals while in stomach ulcers, the pain appears on taking meals. Staying hungry or skipping meals will cause pain in duodenal ulcers and will relieve pain in stomach ulcers. • Victims of stomach ulcers might also experience vomiting and in some cases, might also vomit blood. • You might also experience nausea, indigestion, loss of appetite, weight loss as well as bloating and dark stools when the ulcer has eroded a blood vessel and there is bleeding within the stomach. Treatment For mild and moderate cases, certain drugs called proton pump inhibitors which decrease release of stomach acids may be used. Antibiotics and antacids are also prescribed. Consult your physician for appropriate management advice and always avoid self medication due to potential risks it may carry. For severe cases, surgery may be recommended. Prevention • Avoiding cigarette smoking and regular alcohol use as they are major contributors to ulcers. • Maintaining personal hygiene by washing hands regularly will also reduce your chances of being affected by H.pylori which is the major cause of the disease.